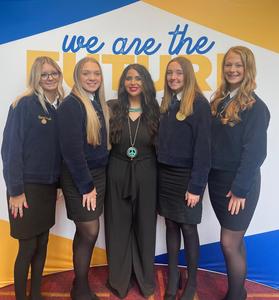 The Godley FFA Floriculture CDE team placed 3rd at the National FFA Competition and individually, Kaley Burke placed 7th and Gracie Dolan placed 10th nationally out of 158 contestants!
The Godley FFA Floriculture CDE team competed at the National Floriculture CDE Contest this week in Indianapolis.
Godley FFA placed 3rd in the nation out of 44 teams nationally, and received a Gold Emblem rating. Team members include Kaley Burke, Gracie Dolan, Cate Heiner, Tanna Tidwell, and Kaelyn Godfrey.
Individually all team members earned Gold Emblem ratings, which are only awarded to 48 participants. Kaley Burke placed 7th nationally and Gracie Dolan placed 10th nationally out of 158 contestants.
Prior to this week the Godley FFA Floriculture team were named the Texas FFA State Champions in May, and in August advanced to the in person contest by placing in the top 20 teams in the nation.
Congratulations to this team on an incredible and successful season! We are so very proud of you, and how you have represented Godley FFA.